How and Why Lithium-ion Batteries Age.

Decomposition products trap the mobile lithium ion in the battery, and the storage capacity decreases over time. In addition, the lithium ion is unevenly distributed in the cell.

This surprising result came from studies conducted by a German-American research team at the Heinz Maier-Leibnitz Research Neutron Source (FRM II) at the Technical University of Munich. Dr. Anatoliy Senyshyn, an instrument scientist at the SPODI powder diffractometer, got to the bottom of the causes by using neutron scattering as a tool to analyze cylindrical lithium-ion batteries.

Together with other scientists, he sought answers to fundamental questions about the structure and behavior of lithium-ion batteries: Why does the available capacity reduce over time? How is the lithium distributed in the battery? 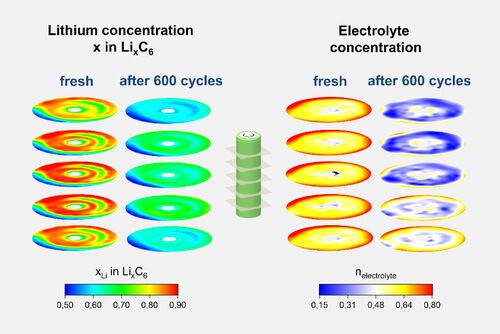 Why is a battery examined with neutrons?

The processes inside a lithium-ion battery, such as a decomposing electrolyte or the distribution of the lithium, which occur during charging and discharging, are difficult to observe outside the cell due to the high reactivity of the cell components to oxygen and humidity.

Neutrons are particularly sensitive to light elements, such as hydrogen and lithium. They can therefore make the lithium visible even inside a cell, allowing investigations under real operating conditions.

Neutrons also offer the advantage that they measure non-destructively. This allows researchers to observe processes in the battery from the outside without interfering with the sensitive system.

Why does the capacity decrease?

In lithium-ion batteries, current flow occurs when a lithium atom emits an electron and this electron flows through the connected device. Within the cell, a lithium ion simultaneously moves from one electrode to another. Thus, there are always only as many electrons available as there are lithium ions. If the battery loses capacity, this is equivalent to "losing" lithium. But where does it disappear to?

The neutron scattering experiments on the STRESS-SPEC and SPODI instruments showed a linear relationship between the loss of mobile lithium ions and the decomposition of the electrolyte, which occurs as an unwanted side reaction during charging, for example.

The resulting decomposition products of the electrolyte deposit lithium atoms, which are then no longer available as mobile lithium to be exchanged between the two electrodes. This is how the battery loses capacity: it ages.

How is the lithium distributed?