How To Elevate The Microgrid To A New Level Through Lithium-Ion Energy Storage?

The use of microgrids is becoming a growing global trend due to two main factors: power supply to remote industrial communities and facilities; the need to disconnect and independently operate buildings or facilities that are usually connected to the common power grid.

Microgrid can be used with or without network connection

In ordinary power, The microgrid connected to the grid can operate independently of the grid to ensure that the power supply can still be maintained in the event of a power outage. This standard is common in places where the power grid is unreliable, such as storm-prone areas.

By using standard electronic components, photovoltaics can provide up to 25% of the electricity that a diesel generator set would generate at any one time. The incorporation of specific software can increase the integration of photovoltaic energy up to approximately 50%.

By adding an energy storage system (ESS), an operator can maximize the contribution of renewable energy, increasing the integration of photovoltaic energy and allowing it diesel-free operation. Fuel savings of 50% to 75% can be achieved. Li-ion battery systems know They are presented as the preferred technology for energy storage, thanks to their high energy density, which allows considerable levels of storage capacity to be saved in a relatively compact design. Lithium battery storage system can now store energy at megawatt scale, and integrated container battery storage systems can be connected in parallel to offer multiple storage capacity of megawatt-hours.

The first factor is that increased use of photovoltaic energy reduces the operating hours of the generator set. If the energy were not stored, the remaining PV power would be lost (or reduced), but a microgrid energy storage system can store the excess PV for later use. In addition, the power output of the PV panels is smoothed out, so the generator set will have to be started and shut down less frequently to compensate for the variation in PV power.

Second, the diesel generator set will be able to run at its highest efficiency level, rather than ramping up and down to meet changes in demand. As a result, operating and maintenance costs are reduced, and the need for immediately available reserves is eliminated.

Lastly, the integration of energy storage allows the operator to use their generator set only when necessary to support loads or to charge the battery.

How does it work in practice?

Consider an industrial microgrid with a load of 12 MW. Normally, it would be powered by six generators, of 2 MW each. BSLBATT ESS battery has replicated the impact of adding 60 to 150% of photovoltaic production (between 7.5 and 18 MWp) and energy storage to cover the function of smoothing the intermittent generation of energy and being able to use it later.

Regulating power requires a relatively small microgrid control systems that can generate electricity for 20 minutes to compensate for changes in the weather. In this case, the microgrid control systems help ensure smooth power output, and saves money, by avoiding the need to increase or decrease the power of diesel gensets. However, the generator sets are still necessary to have immediately available reserves and to recharge the battery when photovoltaic production is low. 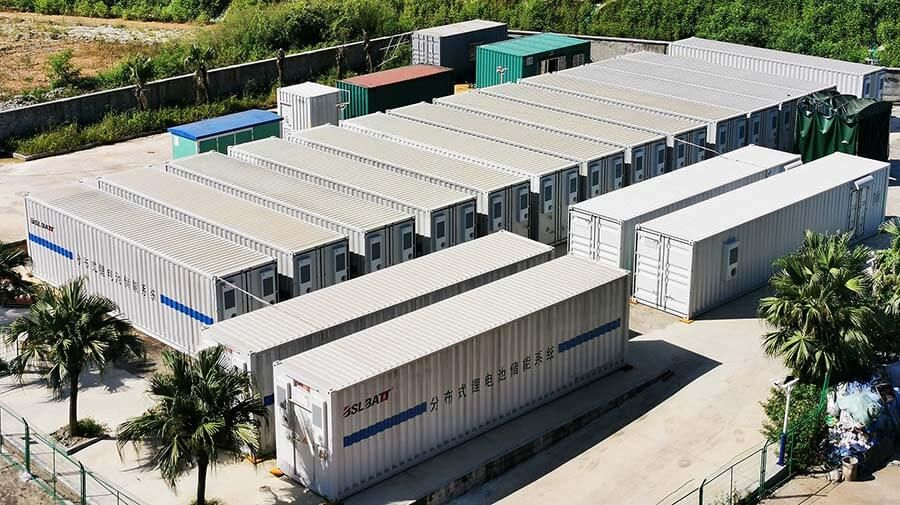 Without a microgrid control systems, the operator can only achieve progressive savings as additional photovoltaic panels are incorporated. However, adding a battery helps to achieve much greater savings. In fact, when regulating power, it is preferable to use a medium battery to optimize the integration of photovoltaic energy, rather than installing additional panels.

In this case, a battery with a size of approximately 40% of the system power (4.6 MW) and a discharge of 20 minutes would be enough to reduce fuel consumption by 50%. It is estimated that this will save up to four million liters per year, with photovoltaic panels of between 7.5 and 11.5 MWp. Any further increase in battery power would only mean additional marginal fuel savings.

If the microgrid is operated using only photovoltaic energy and storing the energy in this traditional system, diesel savings of almost 10 million liters per year can be achieved. This requires careful dimensioning of the system, and sophisticated control electronics are required as there is not an immediately available reserve. In this case, the storage battery must be able to generate all the electricity in the event of a sudden drop in PV production.

Meet the specific needs of installation

In reality, in the integration and installation of photovoltaic power generation, the achievable diesel savings depends on many factors, including:

• The nature of the load

• If it needs to be connected to the grid, its reliability.

Each energy storage facilities are different in terms of load and photovoltaic generation profile, as well as in terms of system, environmental and economic limitations.

There is no single microgrid battery storage that meets the needs of all facilities. Each microgrid battery storage should be viewed as part of a larger system. This requires expertise to identify the optimal microgrid battery storage and PV system, as well as well-tailored controls to minimize costs and maximize fuel savings and PV integration. BSL contributes to this process with a very accurate Matlab-based replica of the electrical and thermal characteristics of the Lithium ion battery system. Exactly mimics the actual behavior of the battery system, and allows to anticipate the evolution of battery power, state of charge and wear over time in a specific application with very high charge and discharge operation dynamic.

Integrate photovoltaic energy from the Arctic to the equator

In the far north, BSL small utility microgrids served the Colville Lake community of 150 residents, 50 miles inland from the Arctic Circle in northern Canada. The 150 kW peak and 30 kW constant load was achieved with diesel generator sets, which had become old and unreliable. One of the main challenges facing the community is that diesel deliveries can only be made once a year via an icy road. Consequently, the distribution network operator, Northwest Territories Power Corporation (NTPC), decided to install a new diesel plant and supplement it with 50 kWp of photovoltaic energy.

A mathematical replica of the electrical grid determined that, with a renewable energy storage system, photovoltaic power can be scaled up to 140 kWp and the potential fuel savings can be quantified to achieve viability.

The town is not connected to the electricity grid or any Power system and has traditionally relied on diesel generator sets, which have recently been expanded with several wind turbines.

Now the 950 kWh of battery energy storage enables the current hybrid wind-diesel power system to realize its full potential, offering cleaner, more reliable and less expensive energy to the local community. The key benefits are that BSLBATT microgrid can now stay connected during variations in wind production and postpone the use of excess wind energy, leading to a significant decrease in diesel consumption.

At the opposite extreme, BSLBATT has installed an solar microgrid for the hybrid photovoltaic-diesel microgrid, located in Qhanqu, South Africa. This remote community is not connected to the usual electricity grid and relied on 16 MW diesel generator sets and 5 MWp photovoltaic solar panels to cover its 8 MW load, that is, 62% photovoltaic energy integration. of the SAPC (South African Power Company) Power grid wanted to expand electricity coverage and reduce diesel consumption. To achieve this, BSLBATT  has provided a distributed power generation capable of offering 2.2 MW and with a capacity of 1.2 MWh.

Since its launch in December 2014, the solar microgrid has allowed the operator to shut down two generator sets, thus achieving a saving of two million liters of fuel per year.

Micro grid is an option that is often considered when operators want to reduce both their operating costs and their dependence on diesel generated power. At the same time, the increasing economic competitiveness of photovoltaics means that hybrid battery storage systems are becoming increasingly attractive. However, to convince investors of its feasibility, micro grid solutions must offer high profitability in terms of considerable savings and operational benefits.

Also, the reliability and quality of electricity cannot be affected. Frequency and voltage stability is critical in remote microgrid projects, where communities are highly dependent on the reliability of the power supply.

Hybrid power from remote microgrids is being driven by the increasing economic competitiveness of renewables. BSLBATT ESS battery storage allows optimizing the integration of renewables while ensuring operational excellence in terms of reliability and stability. Microgrid system optimization are complex issues that require the operator, microgrid company，developer and vendor to collaborate significantly.