What is a microgrid system?

What is the concept of Microgrid?

The microgrid is not a traditional power grid or functional link below the transmission grid or distribution grid.

Microgrid system is a technology, a new grid technology to improve the efficiency of distributed energy operation and utilization, realize its friendly and flexible grid connection, improve the reliability of energy supply and power quality, meet the diversified needs of users, and is an important part of smart grid technology.

Microgrids have one or more distributed energy resources that generate energy (solar panels, wind turbines, combined heat and power, generators). In addition, many of the newer microgrids contain energy storage, usually by high volt lithium batteries. Some now also have to charge stations for electric vehicles.

Where can microgrids be used?

A microgrid is an independent power system that serves a discrete geographic area, allowing you to generate your own power on-site and use it when you need it most. There are many places suitable for microgrids, mainly based on local load demand, the current state of the grid and distributed energy, such as urban microgrids (industrial and commercial park microgrids, residential district microgrids, campus microgrids, military microgrids, hospital building microgrids, community microgrids), remote farming and pastoral areas microgrids, and island microgrids.

It is important to note here what is not a micro-grid:

Some people use the term to describe simple distributed energy systems, such as rooftop solar panels. A key difference is that the microgrid will keep the power flowing in the event of a central grid failure. Solar panels alone will not. Many homeowners with solar panels are unaware of this fact and, accidentally, lose power during grid outages. In addition, a simple backup generator is not a micro-grid. Such systems are only used in emergency situations.

We can learn about microgrids by looking at three characteristics：

Firstly, it is a localized energy source, which means it creates energy for nearby customers, unlike the large central power sources that provide us with most of our shops.

The central grid pushes the power from the power plant over long distances via transmission and distribution lines. The long-distance electricity supply is inefficient, as eight to 15 percent of it is dissipated during transport.

Microgrids overcome this inefficiency by generating power close to the power they serve. Generators are located near or inside buildings, or on the roofs of solar panels.

Independent of the central grid

Secondly, microgrids can be disconnected from the central grid and operate independently. This islanding capability allows them to supply power to customers in the event of a storm or other disaster that disrupts the grid.

In the USA, central grids are particularly vulnerable to outages due to their sheer size and interconnectedness - more than 5.7 million miles of transmission and distribution lines. As in the Northeast blackout of 2003, a single tree falling on a power line can destroy power in several states and even across the international border with Canada. Through islanding, microgrids can avoid such cascading grid failures.

Although microgrids can operate independently, most of the time they usually remain connected to the central grid (unless they are located in remote areas where there is no central grid or where they are unreliable). As long as the central grid is functioning properly, the two functions work in a symbiotic relationship, as described below. 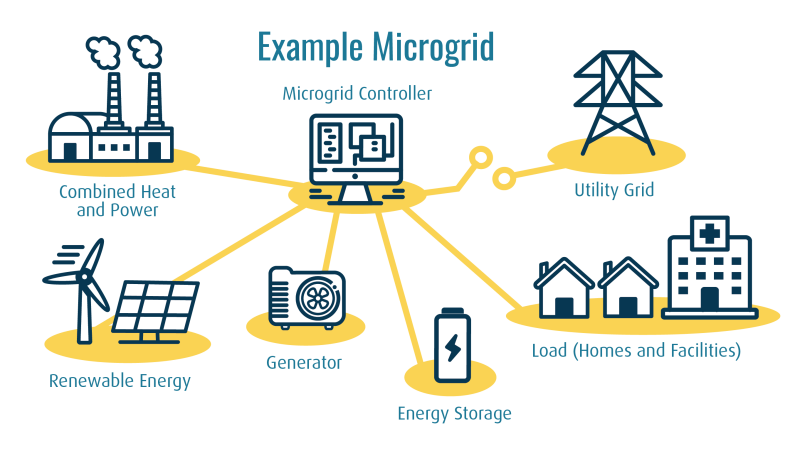 Resources can be intelligently controlled

Thirdly, microgrids provide intelligent control over the distribution of resources, especially if they are equipped with advanced systems. This intelligence stems from the microgrid controller, the central brain of the system, which manages the generators, batteries, and power system of nearby buildings with a high degree of sophistication.

The microgrid controller programs multiple resources to meet the energy goals established by the microgrid's customers. They may be trying to achieve the lowest price, the cleanest energy, the greatest electrical reliability or some other outcome. The controller achieves these goals by increasing or decreasing the use of any of the microgrid's resources (or a combination of these resources), just as a conductor calls on various musicians to raise, lower or stop playing their instruments for maximum effect.

Working together through complex algorithms, the resources of a microgrid create a whole that is greater than the sum of its parts. They raise system performance to levels of efficiency that no one else can. All these business processes are managed automatically and in an almost instantaneous manner. No human intervention is required.

Microgrids have been around for decades, but it is only recently that their reliability has become more widely known. Due to climate change, aging infrastructure, cyber-attacks and other threats, the pace of installation of microgrids will gradually accelerate and is expected to increase considerably in the future as the price of distributed energy decreases and concerns about power reliability intensify.

What are the types of microgrids? Microgrids based on the area of use.

Microgrid models can be used in specific areas where uninterrupted energy is needed, such as hospitals or university campuses, or they can be used to provide energy distribution to residential or industrial sites, covering the entire area. There are also examples of microgrids used for strategic reasons, such as securing energy supplies for military bases. Microgrids can be as small as an apartment or as large as a province.

What does a microgrid consist of? Microgrid Components

Connection points to the general (macro) grid: Microgrids can be designed as power connections or islands. Microgrids connected to the utility can continue to consume without interruption in case of utility outages or changes in demand in different areas. The port design requires the microgrid to be connected to the microgrid through necessary protection circuits in case of maintenance or excess capacity.

How does the microgrid work?

There are two typical modes of microgrid operation: under normal conditions, the microgrid operates in parallel with the conventional distribution network, called the networked mode; when a grid fault is detected or the power quality does not meet the requirements, the microgrid will be disconnected from the grid in time and operate independently, called the islanded mode. The switch between the two must be smooth and fast.

The microgrid is a single controlled unit in relation to the external grid, and can meet the requirements of power quality and security at the same time. The internal power supply of the microgrid is mainly powered by power electronics that are responsible for the energy conversion and provide the necessary control.

What problems do microgrid systems solve?

The electricity inside the microgrid comes from distributed energy sources such as photovoltaic and wind power or local resource. In places with sufficient wind and solar energy resources, large wind farms and photovoltaic power plants are built, and users (industrial parks, commercial areas, schools, hospitals and even large real estate projects) can make the electricity consumed nearby when they access small wind turbines, photovoltaic, energy storage, gas turbines and other power equipment, eliminating the loss of transmission in the grid and improving the efficiency of energy use.

Single point connection, reduce the impact on the large grid

Microgrid adopts advanced control methods and a large number of power electronic devices to connect distributed power sources, energy storage devices and controllable loads together, making it a controllable load for the grid system, and can implement both grid-connected and independent operation, fully maintaining the safe and stable operation of microgrid and large grid.

The relationship between renewable energy and microgrids

With the intensification of the use of renewable energy sources, especially land and rooftop solar power plants, the feasibility study of microgrid applications becomes relevant. While the geographic location of hydropower and geothermal renewables as defined by Distributed Energy Sources (DES) cannot be chosen and a power plant should be built in an area where the source is almost, the situation is different in the utilization of solar energy.

In rooftop solar systems where production and consumption are close to the same point, OIZ companies and similar power plant installations are connected to the grid in a micro-grid fashion for mutual benefit at minimal cost.

Advantages and Disadvantages of Microgrid Power

What are the characteristics of microgrids?

The development of microgrids has four basic characteristics.

Mainly reflected in the low voltage level, the voltage level is generally in 35kV-80kV; system scale is small, the system capacity is not more than 20MW, usually megawatt level or below.

Microgrid is a smart grid that basically achieves self-balancing of power supply and demand. The annual exchange of electricity between on-grid microgrid and external grid generally does not exceed 50% of annual power consumption, and can guarantee continuous power supply for important loads within a period of time when operating independently; independent microgrid should have the ability of black start.

What is the difference between microgrid systems on islands?

The development of islands needs safe and reliable energy resources and sufficient water resources as a guarantee, while most islands have tight power supply and low reliability of power supply.

In recent years, the protection and development of islands have become a hot spot in the marine industry, and the countries concerned are actively researching and building island microgrids, and their technology and equipment levels and installed capacity are constantly improving.

The main components are basically the same, making full use of the abundant wind energy, light energy and other clean energy on the island, generally aiming at minimizing the investment and operation cost and maximizing the efficiency and reliability of renewable resources use, to provide clean, stable and safe power to the island.

Will the island microgrid have any impact on the main grid?

Off-grid island microgrid will not affect the main larger grid. On-grid island microgrid, due to the randomness and uncertainty of distributed generation and load changes, and the different response characteristics of different energy storage systems in the disturbance process, it will change the fault characteristics of the connected distribution grid to some extent, and the traditional fault detection method will be affected.

However, the island microgrid is generally small in scale, the voltage level connected to the grid is not high, and the microgrid has certain self-regulation and protection functions, which has limited impact on the large grid.

Immediate production and demand balancing is important in microgrid applications. Microgrids with a carefully designed balance of active and reactive power demand and generation forecasts operate at optimal efficiency. Control can be performed from a single-center or in a distributed manner from production and consumption points. Both approaches have their advantages and disadvantages. Many different makes and models of products and system integration options are available on the market.

Microgrid systems have long been used on inland islands, in military zones, and in-service buildings such as airports and hospitals. However, to give an example of a new type of microgrid for renewable energy to increase viability, there is a current model that began to be built in 2016 in Brooklyn, New York, where energy can be traded between individuals (homeowners), offering blockchain technology settlement. In addition to this, microgrid applications continue to be widely used in organized industrial areas, hospitals and similar locations with high energy continuity as rooftop solar system installation and commissioning become more popular.

As a microgrid company, BSLBATT can provide customers with energy solutions such as hybrid microgrids and utility-scale energy storage systems to minimize power generation costs and provide reliable power in remote areas or reduce electricity bills for businesses and industries.